Update on all actions in Climate Change Action Plan 2020-25

Phase 1 of a large-scale programme of energy efficiency improvements and renewable energy installations has been implemented and the work is due to complete in March 2021. This covers 11 buildings within the Council's estate (work will complete on The Sharp Project in Q1 of the next financial year)

A range of measures has been installed across 11 buildings, based on the findings of detailed energy audits. They include LED lights fittings, building management systems, pipework installation and a pool cover. Nine buildings have also had renewable energy generation capacity installed via solar panels (photovoltaics (PV)) on the roof.

In addition, work continues on the delivery of longer-term projects and also on seeking additional funding where possible to support an increase in activity.

In a new opportunity, we are piloting novel heating and hot water technology with Hydro Zero, a UK company.

Traditional approaches to reducing or removing gas can be costly, requiring significant changes to a building’s fabric and heat distribution system: this pilot uses hydrogen and plasma to produce heat via an electrochemical reaction and has significant potential to provide a viable alternative to gas going forwards.

Hydro Zero are currently installing a boiler at Gorton Library - at no cost to the Council - which will be complete in February 2021; at which point detailed monitoring of cost and carbon savings will begin.

In the Old Town Hall a 40% energy reduction and up to 25% carbon saving (against 2009 usage) is being delivered as part of the Our Town Hall refurbishment programme (re-occupation is due in 2024) The measures being implemented include:

Additional annual carbon savings of 415 tCO2 will be generated as part of the new £5m European Regional Development Fund project, Unlocking Clean Energy in Greater Manchester. This will fund solar roofs, solar car ports and battery storage at the National Cycling Centre (in 2021-22) and at our Hammerstone Road depot (in 2022-23). The works are part of a wider GM project that includes the Energy Systems Catapult developing innovative business models to support greater rollout of renewable energy in future.

Further carbon savings will also be created should the bid to the UK government’s Public Sector Decarbonisation Scheme be successful. These funds will support additional energy efficiency and renewable energy installations in up to 13 Council buildings, potentially including the Aquatics Centre, with a focus on decarbonising heat. This is part of a Greater Manchester consortium bid.

A new Manchester Build Standard has been developed to reduce the carbon impact of new-build developments and retrofit projects delivered by the Council. It is aligned to best practice guidance from the Building Research Establishment and the Royal Institute of British Architects and was endorsed by the Manchester Climate Change Partnership in December 2020.

The new standard has been rolled out across Capital Programmes and metrics have been agreed for inclusion within future capital business cases in early 2021 once the standard has been formally approved by the Executive (date tbc). A process is being developed to keep the Standard up to date and a programme of training for internal staff has begun. The Standard has been shared with external partners with an interest in driving sustainable construction including the North West Construction Hub Board and the National Association of Construction Frameworks.

The Building and Energy Strategy sets out the Council’s approach to reducing carbon emissions across the operational estate, including the procurement of green energy, the generation of renewable energy, and infrastructure to support the wider take-up of electric vehicles; it informs the ongoing retrofit of the Council’s estate to reduce carbon emissions. A final version of the report will be scheduled for approval in the coming months.

A feasibility study on the potential for large-scale renewable energy generation schemes (including solar PV, onshore or offshore wind) to support the Council’s transition to zero carbon began in October 2020. The objective of the study is to identify options to save 7,000 tonnes of CO2 per year by 2025.

The study assesses options to deploy renewables at scale on Council buildings and land, on assets owned by third parties and via different business models. The key findings are likely to set out two options: either invest directly in a large-scale solar generation scheme or enter into a Power Purchase Agreement (PPA) with an energy provider to purchase the energy directly from such a scheme. Each has different financial, risk and carbon impacts which will be considered in detail as options are taken forward for further analysis. The full findings will be presented to the Council’s Zero Carbon Coordination Group in February 2021.

In September 2020 a three-year programme to retrofit Manchester’s streetlights with LEDs was completed.

The Civic Quarter Heat Network will initially serve seven city centre buildings with the potential to connect more in the future. This is a £24m project containing a 3.3MW Combined Heat and Power (CHP) unit which will initially run on gas (a proportion of which will be ‘green gas’) and has the potential to introduce hydrogen into the mix in future to further reduce its carbon footprint.

2km of district heating transmission network has been installed (pipes, power and communication cables). The network has an expected operational life in excess of 50 years. The Tower of Light is complete and in-building final connections for heat and power are in progress and will go live in February / March.

Commissioning of the energy centre (the centralised boiler plant) is in progress and energy generation will start in February. There have been some delays caused by Covid-19 including the transformation of the Manchester Convention Centre into the Nightingale Centre. The Town Hall is due to have equipment installed by September 2021 with power supply commencing in June 2022 and heat supply in November 2022. 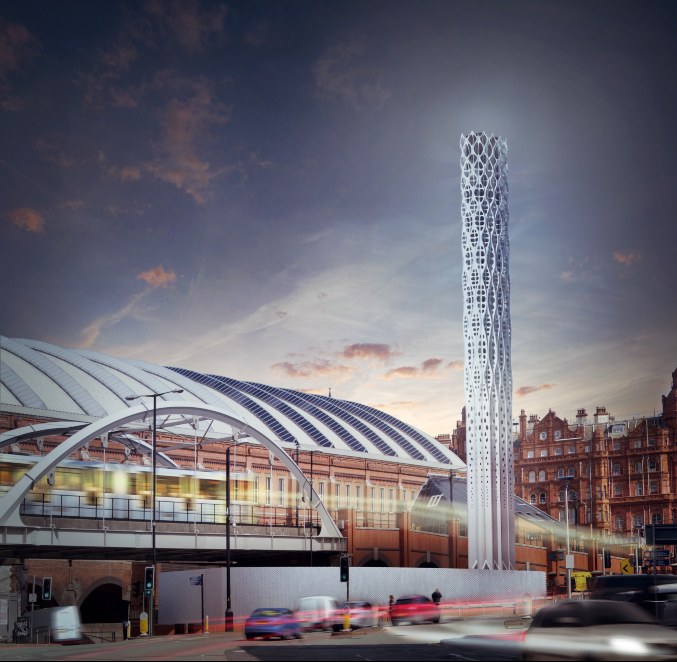 Using the Northwards Housing Zero Carbon Study Report, published by Savills, an estimate has been calculated for the average cost of low carbon retrofits to social housing (£25,600 per dwelling). These figures were extrapolated to estimate the cost of retrofitting owner-occupier and private-rented sector housing; this figure is estimated between £16,000 and £39,000 per dwelling.

In addition, GMCA have been carrying out a detailed study of housing stock condition across Greater Manchester which is due to complete early in 2021; these findings will be fed into future planning.

A significant amount of funding has been secured to improve the energy efficiency of Manchester’s housing stock, and more funding applications are in the pipeline.

One of the ways in which the Council is using its direct influence to support external partner organisations is by ensuring that the benefits of transitioning to zero carbon are clearly outlined in the provision of loan funding and the commissioning of services.  For example, we have supported the LTE Group and Manchester College with loan support towards the delivery of their estate strategies. Several design features have been included to reduce carbon emissions including the application of BREEAM standards to achieve an ‘Excellent’ rating, an EPC rating of A and the reduction of operational costs through sustainable design.

Similarly, where senior Council leaders have roles as directors on various boards and partnerships, influence is used to ensure that investment decisions and development of strategies are aligned to the Council’s Climate Change Action Plan and/or the Manchester Climate Change Framework.

The Greater Manchester Local Energy Plan project is a 2-year project designed to develop Local Area Energy Master Plans to help optimise current and future energy assets and to support energy innovation. Manchester City Council is one of 11 partners involved with a £6m Innovate UK grant, led by GMCA with specialist expertise from the Energy Systems Catapult - work is expected to commence on our Area Plan in early 2021.

Action 1.11     Leasing or Disposing of Council Land and Buildings

Our Development Team has started to review the processes and governance arrangements required to ensure the Council’s zero carbon commitments are reflected when Council buildings or land are disposed of, or leased to a third party.

The consultation on key issues in the new Local Plan for Manchester took place in 2020 and included the target to achieve a zero carbon Manchester by 2038. Feedback from the consultation confirmed that zero carbon was a key issue across the range of responses from individuals, businesses and other organisations.

The next stage will be to develop a first draft and to include key policy options with a preferred policy approach identified. The current Core Strategy (Manchester's adopted Local Plan) includes a suite of policies (EN4 to EN8) that guide development towards zero carbon:

The task ahead is to consider where these policies need to be revised in the light of new evidence and understanding about the pace of change required to meet the CCAP targets.

Several activities have taken place to develop partnership working with local and national experts. In October 2020 a ‘partnership mapping’ exercise took place within our City Policy and Corporate Estates teams to develop a structured approach.

We continue to contribute to, and drawn expertise from, the North West Construction Hub, the National Association of Construction Frameworks and the Cambridge Centre for Smart Innovation and Construction, along with Highways England and the Environment Agency.

Capital Programmes are also working with Wilmot Dixon to identify key performance indicators which can be rolled out to all framework contractors as a national trial. The Manchester Low Carbon Build Standard has been shared with the Core Cities Low Carbon group and further discussions are planned to support development of a Greater Manchester Carbon Standard for buildings.

There will be further meetings with City Policy to progress discussions on the Local Plan and with the Manchester development community to identify opportunities for collaboration.