A range of eCargo bikes which will be available for hire.

A fleet of electric cargo bikes and trailers is to be launched in Manchester offering an affordable and green alternative to cars.

As part of an ambitious scheme 26 electric cargo bikes and 6 trailers will be made available, allowing businesses and community groups to hire the bikes but also as an option for residents across the city.

The bikes, which can travel at speeds of up to 15mph, are able to comfortably carry a weight of 250kg allowing people to transport cargo with ease, and help reduce reliance on motor vehicles.

The scheme was made possible after Manchester City Council successfully bid for a £173,000 grant from the Energy Savings Trust, supported by the Department for Transport.

Seven organisations, including the Council, will be partners in this project so that a viable and well-used fleet of eCycles can be established in the city.

In the coming weeks bikes will be distributed to partners, with the central depot of bikes for hire opening in the first weeks of February. 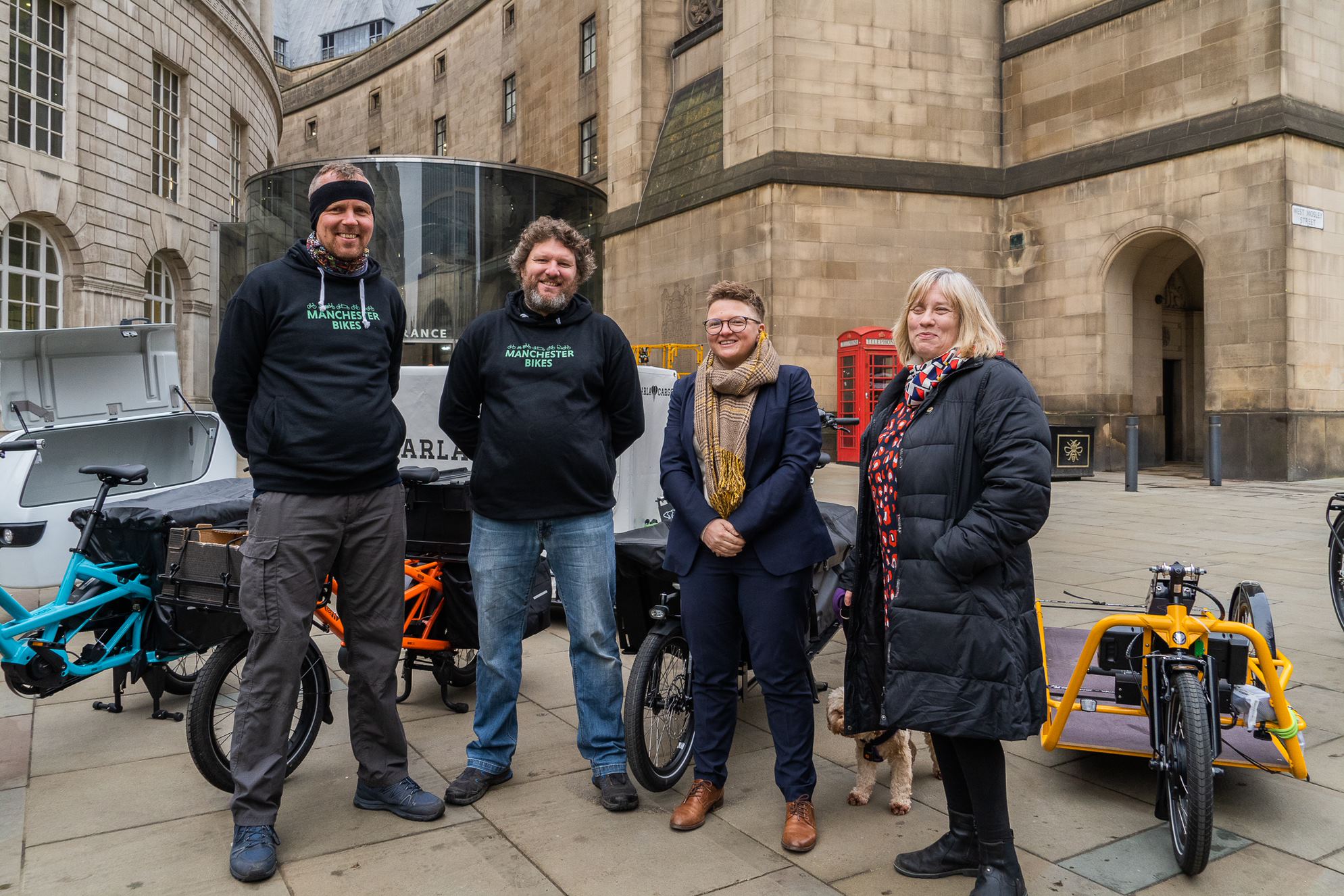 It is hoped that over time this fleet will be the first wave in the modal shift towards greener ways of transport and prove that heavy lifting doesn’t always have to require a car or small van.

The Council is one of the several groups who will begin using the eCargo bikes as part of day-to-day operations with Parks, Cemeteries and Neighbourhood Services teams all signed up to take part.

As part of the project a number of cargo trailers will also be made available so that people with non-electric cycles still have the opportunity to carry larger loads without resorting to using a car.

For public use the bikes start at £12 per day, up to 14 days of usage with checks made before their hire to make sure users have the appropriate level of cycling proficiency to ride. Businesses will be able to loan the bikes for longer periods of time allowing them to find out if they would work for their business model.

Manchester Bikes, the group tasked with the operation of the scheme has launched a website - www.manchesterbikes.co.uk/cargo - where more information can be found.

The bikes can be collected at a central depot in Chapel Street, close to the city centre, though plans are being explored on how best to roll out the service to communities and local hubs.

Councillor Bev Craig, Leader of Manchester City Council, said: “In Manchester we really want to show that there are alternatives to using cars and other polluting means of transport. We know that a complete societal shift is required in terms of how we view transport, and as a Council we want to play our part in bringing about that change.

“By demonstrating that affordable and effective alternatives are available to the public we are breaking down barriers that may otherwise prevent someone making a positive change.”

Councillor Tracey Rawlins, Executive Member for Environment said: “For so many of us the car is the only option we think of when the need arises to transport something from A to B. The roll out of this eCargo scheme is the Council showing that there are alternatives, and we want to be at the forefront of championing them.

“As with any change that touches on the climate emergency, whether that’s going vegan, switching energy supplier or making the shift to cycling it can initially be daunting. Schemes like this can and will make a real difference in showing ordinary Mancunians that alternatives work and that collectively we can all make a difference.”

What is an eCargo bike?
An eCargo bike has a rechargeable battery, an electric assist motor to aid pedalling and the ability to carry loads e.g., a large container unit (max load up to 250kg plus rider).

The project is also purchasing a number of Carla Cargo trailers which allow for loads to be pulled behind a non-electric cycle. The advantage of an electric cargo bike is that it makes carrying loads easier and safer by being able to maintain speed and also move swiftly from a stationary position. The power assist means the range for deliveries /moving goods is extended. The motor must not be able to propel the bike more than 15.5mph. 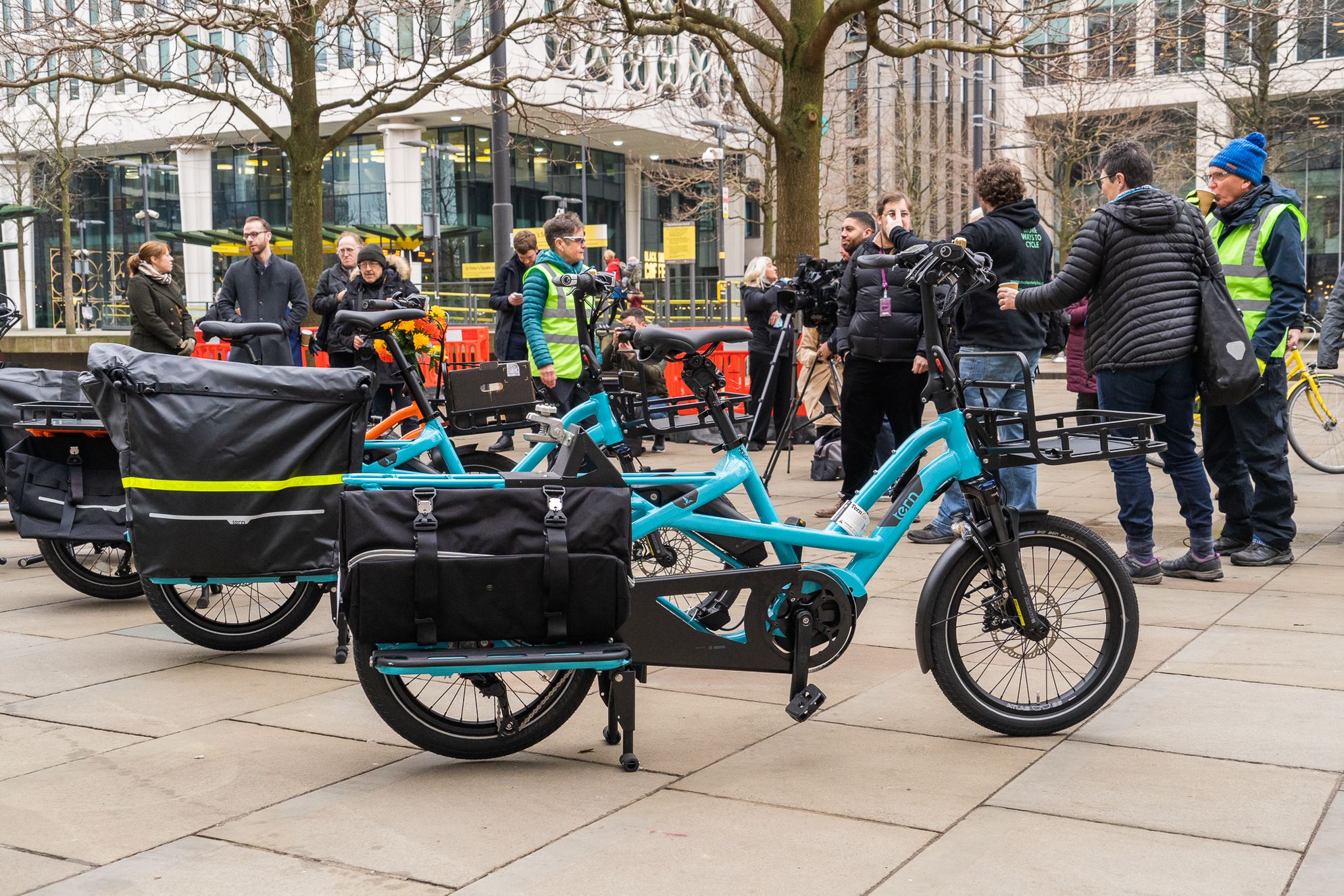