Sorry, we're experiencing technical problems with some of our forms and some requests may not be processed at this time. We will provide further information when we can.

The Council and democracy Our Town Hall Project - the transformation

What's planned for the Town Hall and Albert Square

Our plans for the Town Hall and Albert Square are now well under way.

The Town Hall itself is being repaired, refurbished and brought into line with the requirements of a modern-day civic building, however much of the work we’re doing won’t actually show once it’s reopened. There’s a huge amount of ‘invisible’ work with this project: we’ve been taking out the many obsolete elements from the building, such as the clunky and chunky Victorian plumbing and heating, and replacing it by building in new services that are either underground, out of sight or designed to fit their situation. We also took out the inappropriately tacked on kitchen extension in the courtyard, and it’s being rebuilt in a style much more fitting to this iconic Grade 1 listed building.

Albert Square, meanwhile, will be very obviously different, with a 20% increase in the usable space following approval to pedestrianise all but the eastern side of the square, where the Metrolink tram runs along Princess Street. 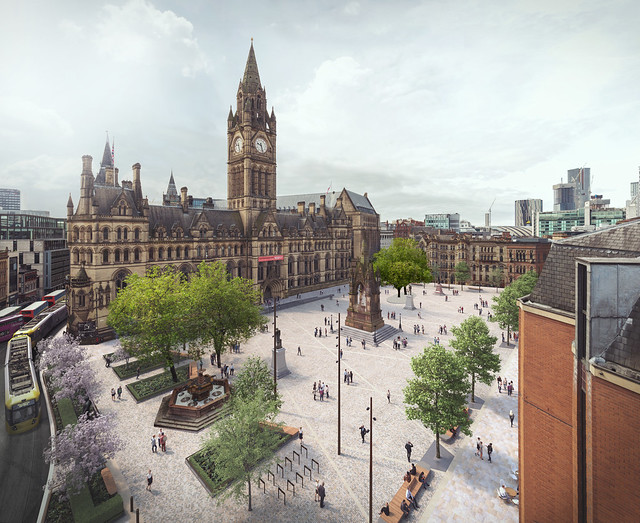 Open the Albert Square Plans album in flickr for illustrations and more detail.