After the Free Libraries Act was passed in 1850, Sir John Potter, the Mayor of Manchester, led a campaign to collect subscriptions to purchase a building and the books to put in it. Cash subscriptions and donations of books came flooding in from all corners, from the working men's committee to Prince Albert himself. In September 1852 Manchester became the first authority to establish a rate-supported public lending and reference library under the Free Libraries Act (Salford opened its library in 1850 but this was under the earlier Museums Act). The Manchester Free Public Library opened at the Hall of Science, Campfield (near the site of what is now the Air and Space Hall of the Museum of Science and Industry). Its first librarian was the prominent public library campaigner Edward Edwards. 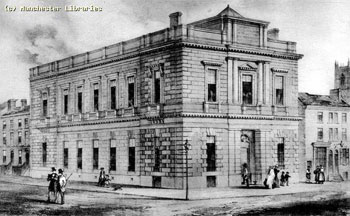 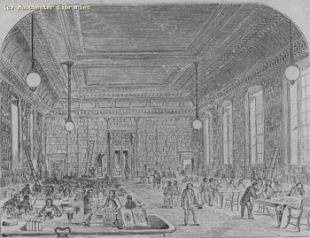 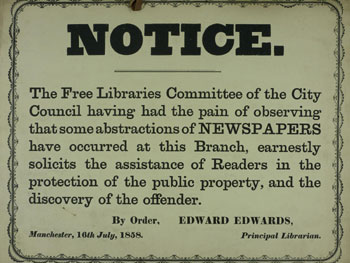 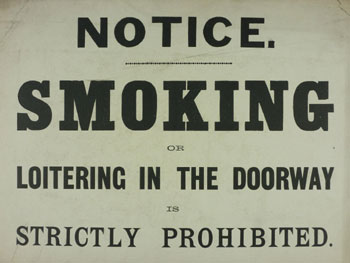 "I call it an arsenal, for books are weapons, whether for war or for self-defence; and perhaps the principles of chivalry are as applicable to the student now as they were to the knight of old - to courage, give man the service, and to heaven the glory ... what minds may be destined to grow up and flourish under the shade of this tree of knowledge which you have now planted, none of us can conjecture; but you of the present generation have nobly done your duty and may calmly leave the result to time, sure that you have placed, beside the sorrows, the cares, and passions of this common sense life, the still monitors that instruct our youth, that direct our manhood, and comfort our old age. " (Sir Edward Bulwer-Lytton, writer and politician, at the opening ceremony, Sep 1852)

"In this institution, special provision has been made for the working classes, by means of a free lending library ... this meeting cherishes the earnest hope that the books thus made available will prove a source of pleasure and improvement in the cottages, the garrets, and the cellars of the poorest of our people. " (Charles Dickens, novelist, at the opening ceremony, Sep 1852)