The main entrance hall gets its name from the huge stained glass window above the front door. The window was designed by the Arts & Crafts artist, Robert Anning Bell RA (1863-1933) and includes a portrait of William Shakespeare and scenes from many of his plays. It was given to the library by Mrs Rosa Grindon, in memory of her husband, the famous Manchester botanist, Leo Grindon.

The two other stained glass windows and the magnificent heraldic decorations were all designed by George Kruger Gray (1880-1943). On the ceiling are the arms and crests of the Duchy of Lancaster, Lancashire County Council and the Sees of York, Manchester and the City of Manchester .  Around the walls are those of Manchester Grammar School, Manchester University, the Manchester Regiment, Humphrey Chetham, the Overseers of the Township, England, St George and St Mary (the patron saint of Manchester).

The white, marble statue on the left stair landing is The Reading Girl by Giovanni Ciniselli (1832-1883). She was bought in Italy by Daniel Adamson, the first chairman of the Manchester Ship Canal Company, and given to the library by his family in 1938.  There is a bit of a mystery about what she is reading - we know that it was originally a poem called The Angel's Story which was printed on paper and pasted into her marble book but, by the time she came to the library, this had disappeared and we have never been able to trace the poem since. 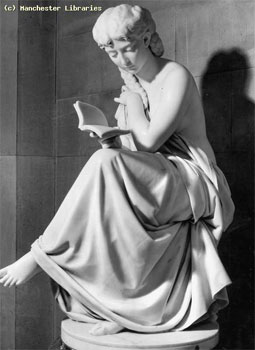 At the heart of the library on the First Floor is the Great Hall, originally known as the Reading Room, which provides seating for up to 300 readers. This wonderful, atmospheric room is lined with bookshelves and lit partly by natural light from the glass 'oculus' in the centre of the dome and partly by a circle of elegant Art Deco style lights. Harris designed an extraordinary wrought iron structure over the central counter, with green malachite pillars, topped by a clock. Around the dome is a quotation from the Bible (Proverbs IV, v7-9) chosen by Harris:

"Wisdom is the principal thing; therefore get wisdom; and with all thy getting, get understanding"

Many of the items of furniture in the Great Hall are those designed by Harris for the building's opening in 1934  - including bookcases, tables, chairs, map cabinets, and lecterns. The acoustics of the Great Hall are unusual to say the least: the dome creates an extraordinary 'whispering gallery' effect, which changes depending on where you stand in the room. 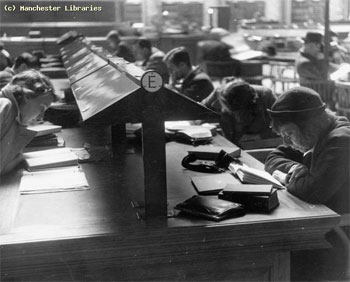 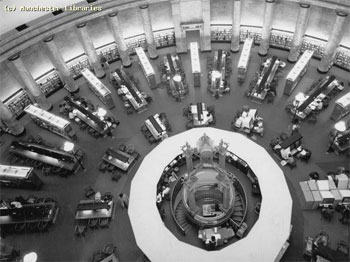 "I used to sit and contemplate in my rest moments these wonderful, incredible panes: 'Wisdom is the Principal Thing Therefore Get Wisdom' and I always had my own table and the spot was K10 - it's still here. And I would start here of a morning because the light was really beautiful, natural light ... And then as the light would move around, I would come round and go to another table and follow the light. The light coming through now is just perfect - look at that. That's beautiful. Look at that! A flying saucer in Manchester !" (Clement Cooper, photographer)

"I had begun using the Manchester Reference Library in Piccadilly in the period following my stint at the Textile Trader ... The new Central Library which replaced the chicken house was an imposing circular structure with an enormous reading room, a small theatre and carrels where serious students could carry on their research without interruption. The portico of the magnificent edifice quickly became a popular rendezvous and "Meet you at the Ref" became a familiar phrase on the lips of students, lovers and unemployed youths. I was there on the opening day and on many days thereafter; the Ref played an important part in my life for I made many friends there." (Journeyman, by Ewan MacColl, 1990)

Exhibitions have always been a part of life at Central Library. They used to be held in the Exhibition Hall (now Archives and Local Studies). All kinds of topics were covered, from history to horticulture and propaganda to postage stamps. The Children's Books exhibition in December and the Summer Holidays exhibition in spring were annual favourites. One of the best-attended exhibitions at Central was the Model Railways exhibition in September 1936 with over 61,000 visitors in only 26 days! 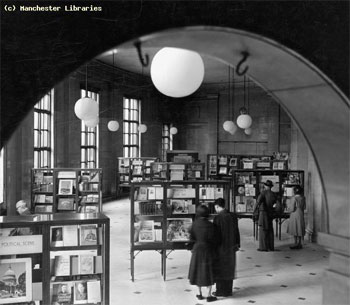 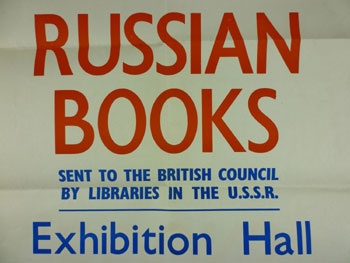 Underneath the Great Hall are the four levels of library stacks (storage areas). Made of steel, they directly support the reinforced concrete floors of the building and drive down into the sandstone bedrock. They contain approximately 22 miles of shelving and were designed to provide storage space for up to one million books. The stacks contain some of the oldest and most precious treasures of the library - these are kept in special secure areas and an underground environment-controlled archive store in the basement.

"The stack staff (then all male) were each supplied with one "stack jacket". This was attractive; a short coat of thick cream linen with three box pleats and a half-belt at the back. But, notwithstanding, it was forbidden to allow the public to set eyes upon it. A row of coat hangers in stack held the discarded black jackets and it was obligatory to change back into them even to go up the spiral stairs into the centre counter. Illicit dashes up and then down were made fairly frequently. "(Elizabeth Leach, former member of staff)

"The female staff in M.P.L. considered it to be a little "common" to appear conspicuous. Long sleeved blouses or jumpers, with modest dark skirts, were the thing. In summer those striped Macclesfield silk dresses were very "suitable". An assistant whose blouse was too revealing risked being asked to put on a cardigan." (Elizabeth Leach, former member of staff)

Shakespeare Hall was staffed by equally formally dressed senior porters whose uniform was a tail-coat with red silk reveres and a tall silk hat. The lift was worked by fourteen year old page boys (who grew up to be porters). They wore "Buttons" uniforms with tilted pill-box hats and acted also as runners carrying letters and messages about the city. Most of them were absolute little devils - but today we should regard them as children. The Second World War changed all that. Before long we had to wear whatever clothes we could obtain, but never, never, trousers on women even if this meant painting stockingless legs with leg-dye or, as a last resort, gravy-browning." (Elizabeth Leach, former member of staff)

See our Local Image Collection for pictures of Central Library