The Opening of Central Library

Prime Minister Ramsay MacDonald laid the foundation stone of the building on 6 May 1930 . Four years later the library was officially opened on 17 July 1934 , by King George V, who told the crowds of thousands:

"In the splendid building which I am about to open, the largest library in this country provided by a local authority, the Corporation have ensured for the inhabitants of the city magnificent opportunities for further education and for the pleasant use of leisure." 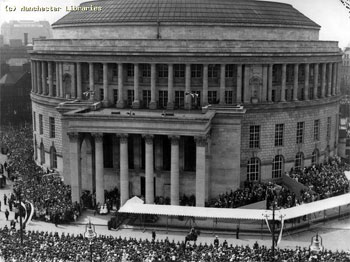 "The royals were whisked off to the second floor where there was a Reception Room and private apartments usually used by the Chairman of Committee. As there was no plumbing on that side of the building two Elsans [toilets] had been provided for royal use. The King drank a welcome whisky and soda and the Queen a cup of tea from a newly-purchased tea-service that later went into the Town Hall china closets." (Hilda McGill, former member of staff)

"The Library in Piccadilly closed on Saturday 14th July, and the new building opened to the public at 9am the following Monday. We were working right up to the last minute. I remember that on the Sunday evening I was busy in the Technical Library with a penknife removing the brown wrapping paper from the brass handrails on the staircase leading down to the book stack. We closed only for the day of the official opening, Tuesday 17th July. It was a beautiful sunny day and the streets around St. Peter's Square were lined with thousands of people. Staff were issued with passes so that we would get through the crowds to a specifically cordoned off area beside the new Central Library where we could see the King lay the foundation stone of the Town Hall Extension before he opened the library." (Izzy Wallman, former member of staff)

"I remember the King very clearly. He looked very much as he did on the newly-minted pennies of the time, with a very bronzed face and he spoke with a guttural accent. Queen Mary looked very regal indeed, taller than the King, and she wore her famous toke hat. The King performed the official opening with a key made from Welsh gold, which was put on display afterwards in a glass showcase in the library. After the opening, the King and Queen inspected the Library accompanied by various dignitaries, including the Lord Mayor, the Bishop of Manchester, the Town Clerk, the architect (Mr. Harris) and, of course, the Chief Librarian Mr. Nowell." (Izzy Wallman, former member of staff)

See our Local Image Collection for pictures of Central Library