At the heart of Manchester’s Town Hall, centre-stage in the Great Hall, is the organ. Built in 1877 by Aristide Cavaillé-Coll of Paris (arguably the best organ builder in the world at the time) at a cost of £2,700 (approx £2.5m today), Cavaillé-Coll later returned to make a few additions to the original scheme, which resulted in his final design of 1893.

In the years since, however, it has been subject to a number of modifications, and a condition survey, carried out in October 2015, showed that the instrument is in dire need of major restoration and reconstruction. As an important part of the Our Town Hall project, this work will see the organ largely restored as Cavaillé-Coll originally intended, after the wholesale removal of the entire organ, pipe by pipe.

Thankfully, that condition report also showed that the instrument still has a distinctive voice: although changes have taken place, Cavaillé-Coll 's tonal palette is unmistakable, and it is possible to recover this. Virtually all of the original pipework survives, with comparatively little alteration, and by applying modern conservation techniques and a knowledge of Cavaillé-Coll’s practices, the original sound can be restored.

The work will be undertaken jointly, by Nicholson & Co of Malvern, and Flentrop Orgelbouw, of the Netherlands.

Andrew Caskie, of Nicholson & Co, was on hand to play a few short phrases on the instrument just before his team started work on dismantling it.

(Open a transcript of this film in a new document)

“As two leading organ building firms, we have decided to make a joint offer as a collaboration on this exciting and significant project. We feel that pooling our respective skills, experience, resources and locations makes our joint offering markedly stronger than what either of us could offer independently.

The organ will be returned in almost every way to its 1893 condition, including the return of the original pitch, the manufacture of new actions (with three new Barker Lever machines), new console, chests, and much of the wind system, all in a strict replica of the Cavaillé-Coll style.  The casework will be returned to its original 1877 appearance."

The organ has now been completely dismantled and removed from the building. It'll be returned to the building for completion to coincide with the re-opening of this much-loved building. See the project update page on Nicholson & Co's website for captioned images of the process, that describe the process and give lots of background about their work. 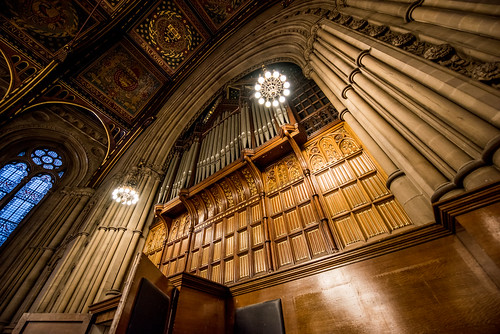 Open the Town Hall Organ album in flickr for images of the organ.